The key for Ephemeroptera can be found in Chapter 4 of the Guide to Aquatic Invertebrates of the Upper Midwest, pages 49-62. Once you have keyed out your insect, you can use the photographs on this website to verify your identification. If you click on the link to each family on the right, you will be directed to a page that has photographs of that family along with close-up photos of their identifying character. The character featured matches the character used in the identification key.

Most mayflies have three caudal filaments (tails) although in some taxa the terminal filament (middle tail) is greatly reduced and there appears to be only two caudal filaments. Mayflies have gills on the dorsal surface of the abdomen, but the number and shape of these gills vary widely between taxa. All mayflies posess only one tarsal claw at the end of each leg. Characters such as gill shape, gill position, and tarsal claw shape are used to separate different mayfly families. 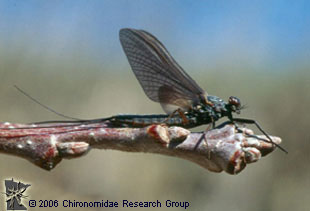 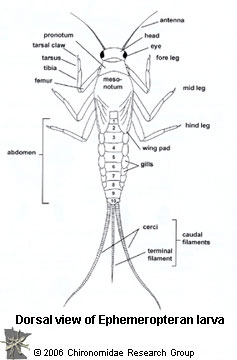