Our research program focuses on the significance of Chironomidae in aquatic ecosystems. We attempt to balance taxonomic, systematics and ecological research on Chironomidae in an effort to better understand the ecological framework within which evolutionary processes have operated to produce the biological diversity of the family. The research program consists of six basic areas of emphasis: taxonomy and systematics, biodiversity studies, responses to various types of pollution, stream ecology, studies of the diversity and co-evolution of Trichomycetes and their Chironomidae hosts, and cold-hardiness in aquatic insects. Look below to read more about each of these areas and locate titles of individual projects and related publications. 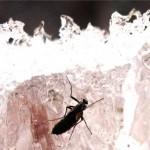 Winter-Active Chironomidae: The low temperatures and abundant groundwater dominated streams in Minnesota provide opportunities to study cold-hardiness in aquatic insects. Most of our research has focused on Diamesa mendotae Muttkowski, a winter-emerging midge commonly observed in Minnesota on the snow along stream banks during the winter. We are interested in determining cold tolerance and identifying cold-hardiness mechanisms (i.e. cryoprotectants, ice nucleating agents) for this and other winter-emerging species. Our goals are to better understand how these insects survive at low temperatures and to assess how temperature regulates the distribution of these species. Furthermore, these results are important to predict the impacts of climate change on cold-adapted aquatic insects (Winter-Active Chironomidae Publications).

Taxonomy and Systematics: Our taxonomic and systematics research has produced descriptions of new genera and species, descriptions and re-descriptions of immature stages, and new interpretations of systematic relationships of Chironomidae. These publications have facilitated more accurate identification of the larval and pupal stages, which are the primary life stages collected in water quality monitoring and studies of stream ecology (Taxonomy and Systematics Publications).

Responses to Pollutants: A major focus of this part of our program is to refine aquatic impact assessment protocols into Rapid Bioassessment Techniques (RBT) for use by state and federal regulatory agencies. Major contributions included development of a technique to utilize the shed pupal skins of Chironomidae as an RBT, and demonstration of the efficacy of the technique for assessing impacts of organic enrichment in urban streams, pesticides, and pollution by heavy metals (Responses to Pollutants Publications). 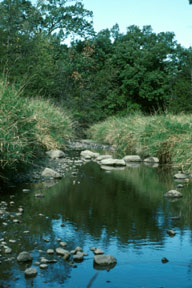 Stream Ecology: Our studies of microhabitat differentiation among co-occurring species have shown that several species of Chironomidae are habitat specialists, predominating in very discrete microhabitats within lakes, streams or springs, or utilizing hyporheic and epirheic habitats. These findings contradict prior generalizations that Chironomidae are predominantly collector-gatherers and habitat or substrate generalists (Stream Ecology Publications).

Co-evolution Studies: These studies were facilitated by a five-year project funded by NSF to determine the coevolutionary relationships among Trichomycetes (fungi) and their aquatic insect hosts and included field work in Kansas, Pennsylvania, Minnesota, Colorado, Argentina, Tasmania, New Zealand and South Africa. We have documented a high degree of host specificity among Trichomycetes using Chironomidae and Stoneflies as hosts. At least 70 different species of fungi have been isolated from Chironomidae. Other aquatic Diptera are being discovered as hosts (Co-evolution Studies Publications).