Thermal regimes in lotic waters can be extremely variable and are dependent on numerous factors such as stream shading, stream size, ground water influence, climate, and elevation (Allan 1995). Surface water dominated (SWD) temperate streams typically have annual variations of 0 to 25°C (Allan 1995) due to the close relationship between water and atmospheric temperature. In temperate zones, medium sized (i.e., 3rd and 4th order) SWD streams tend to be most thermally variable as small streams are buffered by riparian shading and larger streams and rivers have greater thermal inertia (Ward 1992). In contrast to SWD streams, ground water dominated (GWD) streams are thermally buffered by groundwater entering the system that us usually within 1°C of average annual air temperature (Ward 1992, Allan 1995). The annual range in temperature in GWD streams can be as little as 1°C, but this variation is dependent on the degree of ground water influence (i.e., volume or distance from source), stream morphology, and solar radiation. In addition to greater annual thermal variation in SWD streams, diel variation is also greater in SWD streams than in GWD due to the greater influence of atmospheric temperature. Despite variation in thermal regimes between SWD and GWD lotic waters, these stream types tend to have similar average annual temperatures. Besides differences in the variation and the minimum and maximum of temperatures in SWD and GWD streams, accumulation patterns of thermal units (e.g., degree days) are also very different. In GWD streams, degree day accumulation is more steady, but in SWD streams, much of the total heat energy is accrued during short periods (e.g. summer months) (Figure 1).

Water temperature and thermal regime are major regulators of the life history, phenology, and taxonomic composition and structure of macroinvertebrate communities in lotic waters (Resh and Rosenberg 1984). Aquatic insects have evolved a wide range of temperature tolerances including stable cool temperatures (cold stenothermic), stable warm temperatures (warm stenothermic), and temperature generalists (eurythermic). The temperature tolerances of insects are often closely linked to dissolved oxygen (DO) levels since cool waters hold more oxygen at saturation. For instance, cold stenothermic insects are generally limited to cool waters due to higher DO requirements (especially apneustic larvae). However, temperature is also important as it relates to the growth and development of aquatic insects. Aquatic insects require sufficient cumulative heat energy (i.e., degree days) to develop and grow into reproductive adults. The timing and pattern of temperature also determines the suitability of a stream. The broadscale distribution of an aquatic insect is therefore largely determined by a species’ optimal temperature requirements as determined by meteorological conditions. At optimal thermal regimes, species tend to be more abundant and larger with greater fecundity. As thermal regime become less optimal, abundance, size, and fecundity tend to decrease until the population is no longer self-sustaining or is completely absent. This generalization does not take into account ground water influence, stream size, stream shading, and elevation. To further complicate this generalization, many species exhibit life history changes (modified voltinism, diapause, etc.) and behavioral adaptations, which allow insects to maximize exposure to their optimal temperatures.

Coffman (1989) proposed the hypothesis that tropical chironomid communities are less regulated by temperature than those in temperate streams. This implies that more seasonally variable temperature regimes (i.e., surface water dominated temperate) create additional niche partitioning and therefore increase taxa richness. To develop their hypothesis, Coffman and de la Rosa (1998) studied chironomid phenology and composition in temperate (Pennsylvania; 2 streams/3 sites) and tropical (Costa Rica; 3 streams/4 sites) streams and observed differences in the richness, composition, and emergence periods of the midge communities between these streams. For example, species richness was, on average, greater in tropical streams and taxa emerged for longer periods in tropical streams. In addition, the temperate streams were dominated by taxa of the subfamily Orthocladiinae whereas tropical streams were dominated by taxa of the Chironominae subfamily. However, this study did not provide a rigorous test of the influence of temperature on Chironomidae communities as Coffman and de la Rosa (1998) only compared stream types (tropical and temperate) that differed in latitude, photoperiod and ecological setting, in addition to differing temperature regimes. Future studies need to expand on this hypothesis to determine how other temperature regimes regulate chironomid phenology and composition in streams that have differing temperature regimes but occur on closer geographic scales with identical photoperiods and similar ecological settings.

Streams in the Metro Area provide a good opportunity for examining the effects of thermal regime and temperature on macroinvertebrate and more specifically chironomid communities. Within a relatively small spatial area, relatively unimpacted GWD and SWD streams can be located.

Question #1: Emergence Duration:
How is the length of chironomid emergence period regulated by thermal regimes?

Null Hypothesis: The emergence duration of chironomids is not influenced by thermal regime.

Alternative Hypothesis: The emergence length for chironomids will be, on average, longer in thermally stable environments (e.g., GWD streams). In contrast, chironomids in streams with greater thermal variability (e.g., SWD streams) will, on average, have shorter emergence periods.

Rationale: The length of chironomid emergence period will be determined by optimal temperature requirements. For example, in groundwater dominated temperate streams more stable temperatures will permit chironomids adapted to cool temperatures to potentially emerge throughout the year. In contrast, some of these coldwater adapted chironomids could potentially develop in streams with greater thermal variability only during colder months, and their emergence periods will be shorter and limited to these months.

Question Specific Methods: Analysis will involve the calculation of the emergence duration for each taxon collected.

Rational: Thermally variable streams will permit increased temporal niche partitioning and allow a greater number of taxa to exist in a system. In thermally stable streams, most taxa will be present in the benthos throughout the year increasing direct competition and reducing the total number of taxa present in the stream for the entire year. The taxa richness from an individual sample will be lowest in streams with less seasonal temperature variation (i.e., SWD streams). Such a pattern will again be the result of increased niche partitioning from temporal variation. I also expect taxa richness to be greatest during seasonal transitions (i.e., spring and autumn) in both SWD and GWD streams due to an increased overlap of thermal tolerances.

Null Hypothesis: The taxonomic composition of Chironomidae is not regulated by thermal regime.

Rational: There is a fairly well documented pattern of changing chironomid taxonomic composition from lower to higher latitudes in the Holarctic region. Low latitude streams tend to support more Chironomini taxa whereas there are an increasing number of Orthocladiinae and Diamesinae as you move to higher latitudes. This pattern can also be seen on local scales were warmer streams support more Chironomini and Tanypodinae taxa and colder streams support more Orthocladiinae and Diamesinae. There is also a similar seasonal shift in these tribes and families where the Chironomini and Tanypodinae dominate in the summer and the Orthocladiinae dominate in the winter. This suggests on a whole that there are generalizations that can be made regarding the temperature requirements of these subfamilies and tribes.

Question Specific Methods:GWD and SWD streams with different thermal regimes will be used to assess patterns in chironomid taxonomic composition. Proportions of Chironomidae subfamilies and taxa richness will be determined for each study site and thermal patterns will be assessed using graphical analyses.

Question #4: Patterns in Emergence Period for Closely Related Chironomidae Genera and Species:
To what degree is emergence duration and first emergence date of closely related genera and species determined by evolutionary history and competition among closely related taxa?

Null Hypothesis: There is no clear pattern in the emergence length or time of chironomids as a function of phylogenetic relationships.

Alternative Hypothesis #1: Species within the same genus have similar emergence periods and first emergences. Such results would indicate that niche partitioning is occurring as a result of differences in feeding or microhabitat selection.

Alternative Hypothesis #2: Species within the same genus emerge at different times and/or for difference lengths. This would indicate that these species are avoiding competition through temporal separation.

Rational: It has been shown that there is very little direct competition between chironomid species as a result of niche partitioning (de la Rosa 1985). Emergence period and first emergence date potentially partitions chironomid life histories by reducing competition and permitting increased taxa richness. Coffman and de la Rosa (1989) observed increased congeneric richness in tropical streams which were responsible for the high taxa richness in these streams.

Question Specific Methods: A number of congeners from sets of closely related genera will be identified from Minnesota streams and used in analyses. The emergence duration and first emergence date for selected taxa will be categorized. These emergence characters will be compared on a phylogenetic tree to identify patterns in evolution and competition related to the thermal environment. 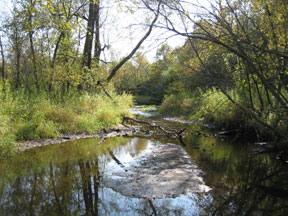 Twelve study sites located in Minnesota, consisting of six sites sampled specifically for this project and six addition sites from other research will be included in this study. My sampling will consist of six SWD and GWD stream sites (three streams of each type). These study sites are small (3-4 order) and located in the Metro Area (Anoka, Scott, and Dakota Counties). Third and fourth order streams will be studied because SWD streams of this size flow year round and experience the greatest fluctuations in temperature due to their small thermal inertia. Attempts will be made to locate streams with as little anthropogenic impact as possible, but some degree of human influence is unavoidable. These study sites will consist of 30 m stream reaches upstream of any anomalous features (e.g., bridges) that might artificially influence stream conditions. In addition to these six streams, pupal exuviae data similar to the data I will collect currently exists from another source. Three GWD and three SWD streams in Minnesota have already been sampled for chironomid pupal exuviae and temperature by Dr. Leonard C. Ferrington Jr. and will be included in analyses.

Chironomid pupal exuviae samples will be collected on a biweekly basis (26 sampling events) for the duration of one year following the methods of Ferrington et al. (1991) from six Metro Area study sites (three sites per stream category [156 samples total]). Pupal exuviae samples will consist of a timed 10 minute sampling period within the 30 m sample reach. Exuviae will be sampled by scooping exuviae into a pan from areas where they collect (in front of snags, in vegetation, back eddies, etc.) and pouring this collection through a sieve (125 µm [standard testing sieve no. 120]). Samples will then be transferred to 4 oz. jars and preserved in 80% ethanol.

Once returned to the laboratory, exuviae samples will be picked from debris in water and identified to the lowest resolution possible under a dissecting microscope. Some exuviae will require slide mounting and subsequent identification under a compound microscope. Specimens which are broken, covered in extensive fungal hyphae, or dried and laterally compressed will not be counted to avoid identification problems or questions regarding the age of the exuviae.

To measure temperature regimes in the streams, temperature loggers will be deployed in the streams for the duration of sampling (one year). Local climate data will be used to assess the degree of ground water influence on these streams. Data from temperature loggers will be downloaded biweekly during pupal exuviae sampling events in case of logger loss or damage. Discharge may also have a considerable impact on the phenology of chironomids so discharge will also be measured on a biweekly schedule during pupal exuviae sampling. Some measures will be performed using a flow meter, but others will be made using only stream cross section measurements. Models will be developed for each stream to predict discharge from cross sectional area. In stream water quality measures (DO, turbidity, conductivity) will be performed on a biweekly schedule during pupal exuviae collections. Habitat measures will also be taken using Rapid Bioassessment Protocols from Barbour et al. (1999).

Huryn, A.D. and Wallace, J.B. 1986. A method for obtaining in situ growth rates of larval Chironomidae (Diptera) and its application to studies on secondary production. Limnology and Oceanography 31: 216-222.