Chironomidae, commonly named “midges”, are a family of small flies whose larval and pupal stages are mainly aquatic. They usually make up over 50% of the insects that live at the bottom of streams and lakes as larvae. They are so diverse and widespread that they can live in most climates and a wide range of water qualities. Some species of midges are very tolerant to pollution, whereas other species are very sensitive to pollution. These characteristics make them excellent candidates for testing water for the presence of pollution. Our research group collects these midges from the water, determines what species they are, and then from that information we can determine the water quality of the stream or lake.

There are more than 1050 species of Chironomidae in North America. Approximately 305 species can be expected to occur in Minnesota. Some streams can have more than 100 species in them. For instance, our research has documented at least 124 species occur in Minnehaha Creek! Chironomidae larvae and pupae are important components of aquatic systems. They can be a large part of the diet of many fish, including several sport fishes in our lakes and streams. Chironomidae are also important in terms of nutrient cycling and can also help in terms of removing or breaking down certain types of pollutants. Although most people generally think of insects as nuisances, we are beginning to develop a better picture of the beneficial roles that many insects play in our lakes and streams. 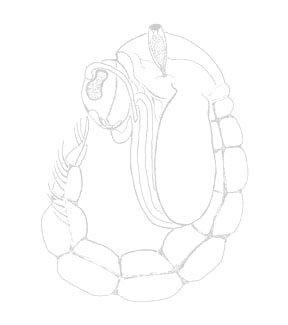