The Saint Croix River in Minnesota and Wisconsin is part of the National Scenic Riverway. The river receives significant groundwater discharge from innumerable springs and seeps in its mid-reaches upstream of Stillwater and the biodiversity of Chironomidae of these groundwater fed habitats is poorly understood. Our goal was to estimate the patterns of Chironomidae communities of 20 spring runs located near terminal springs, and to use data from collections of surface-floating pupal exuviae of Chironomidae to develop models that relate community composition to physical and chemical characteristics of spring runs.

In this project Chironomidae were evaluated using collections of surface floating pupal exuviae (SFPE) that are left behind on the water surface after adults emerge from the water. This method is relatively cost efficient and has been used successfully in other studies of Chironomidae throughout the world (Ferrington et al. 1991).

Five subfamilies of Chironomidae were represented in the collections from the 20 spring runs: Orthocladiinae, Prodiamesinae, Diamesinae, Chironominae and Tanypodinae. The subfamily Orthocladiinae was most species rich with 46 species representing 61.3% of the fauna. Chironominae with 23 species representing 30.7% of the fauna was second in terms of species richness. The remaining three subfamilies, Diamesinae, Prodiamesinae and Tanypodinae, were each represented by 2 species and collectively accounted for 8% of the Chironomidae fauna in the springs. One other subfamily known to occur in Minnesota, Podonominae, was not collected at any sample sites during this project.

The greatest species richness values in the 20 spring runs were consistently related to base flows, entrenchment ratios, and substrate attributes. These results indicate that richness patterns must be interpreted in relation to stream size, entrenchment and substrate heterogeneity which could result in higher species richness in larger streams with good habitat heterogeneity even if moderate levels of nutrient enrichment and/or suspended sediment loads are influencing community structure of Chironomidae.

This project has contributed significantly to our basic knowledge of the biological diversity of organisms in spring runs of the Saint Croix River Basin. Several taxa of Chironomidae that were encountered in this project are not commonly recorded for habitats in the Upper Midwest. These taxa include species of: Pagastia, Prodiamesa, Odontomesa, Heleniella, Hudsonimyia, Krenosmittia, Heterotrissocladius, Parachaetocladius, Rheosmittia, Stempellina and Stempellinella. At least one undescribed genus was collected along with possibly three additional undescribed species. 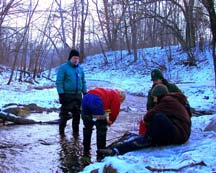