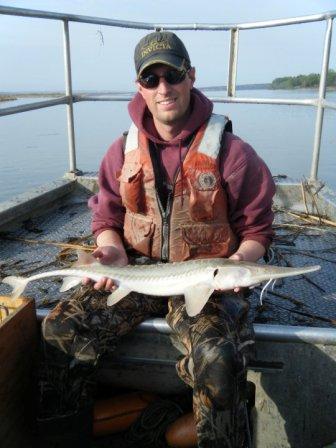 As far as I can remember I have always been interested in fish, their behavior, and their interactions with their environment. As a child I enjoyed fishing, and maintaining aquariums, both practices I continue today. As an undergraduate at the University of Minnesota I worked for several years as a fisheries field technician with the Minnesota Fish and Wildlife Coop Unit, after which I was determined to pursue a career in fisheries. I am interested in the behavior of fishes; particularly foraging behavior and trophic interactions; and how these relationships can affect aquatic communities. My masters research at South Dakota State University focused on trophic interactions of age-0 and juvenile pallid sturgeon. Working with an endangered species reemphasized to me the value of community scale, as opposed to sport fish oriented management.

My current research involves studying the contribution of UCS species to the winter diets and growth potential of trout in southeastern Minnesota, with an emphasis on consequences of possible food web restructuring related to global climate change.