A World Revision of the Genus Pseudosmittia Goetghebuer, 1932 (Diptera: Chironomidae)

Aquatic species of non-biting midges (Chironomidae) are among the most important members of freshwater invertebrates. They occupy a key position in aquatic systems from an ecological perspective and are very valuable indicators in biogeographical, fauna-historical, and phylogenetic patterns. Much less emphasis has, however, been placed on rearing, associating and describing semiaquatic and semiterrestrial species as well as species from temporary freshwater habitats and marine intertidal zones. Consequently, the biodiversity of such midges is much less well known. These groups, however, are very important, phylogenetically as well as biogeographically, since they show adaptations found both among the more primitive and among the most derived groups of Chironomidae. Our investigations in the tropics indicate that these groups may be dominating in some tropical areas. Most of the semiaquatic species of midges are to be found within the subfamily Orthocladiinae where one of the larger genera remaining to be revised is the genus Pseudosmittia. This genus is particularly interesting since it contains species that range from purely aquatic species to others species that are terrestrial, semiaquatic and even intertidal marine as larvae and pupae. In this revision we are treating 95 species, 35 of which are new to science. Phylogenetic analyses show that the apparent many transitions from an aquatic to a terrestrial or marine way of life all are steps of the same trend, from aquatic to disposed for marine/ terrestrial life to terrestrial or marine. As a consequence of the revision six other papers describing new genera previously miss placed in the genus or in need of re-description have been published, are in press, or in manuscript form.

B. Head, posterior and anterior. 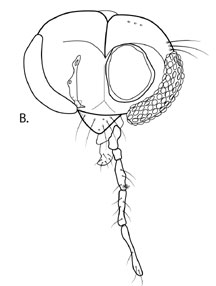 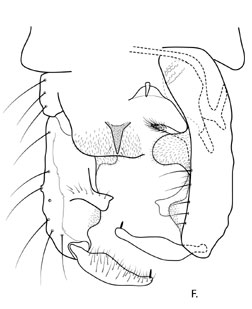